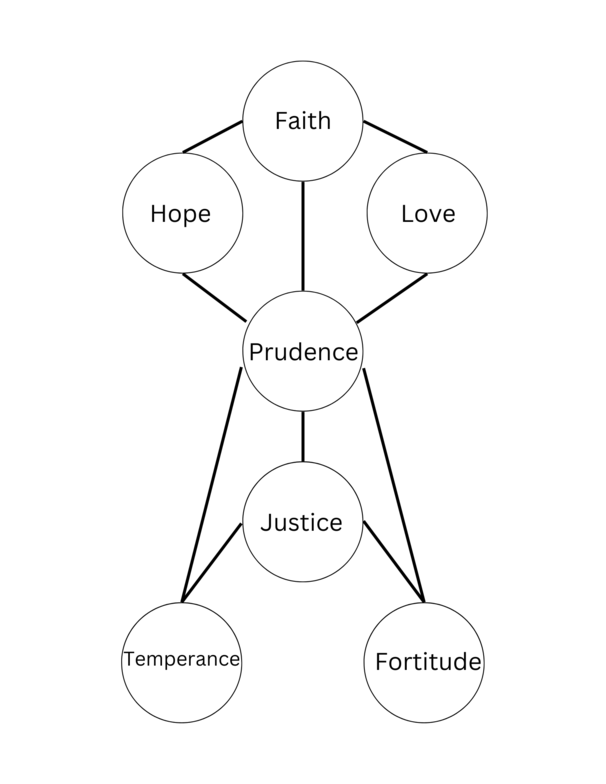 Virtue Ethics goes back to Aristotle.  His idea was that performing certain good habits would have an effect on a person’s soul, and in the future they would be more inclined to repeat similar good acts when necessary.  This way of looking at a person’s character was so prevalent in antiquity that the Early Church Fathers assumed it as a matter of course.  But what exactly is Virtue Ethics and what impact can it have on modern humans?

Simply put, Virtue Ethics means cultivating certain habits of action so that they become automatic.  You might think of a piano virtuoso, who has practiced thousands of hours to be able to play the way she does.  As time went on in the Church, theologians have systematized Virtue Ethics and have narrowed down the most important ones into a list – you might even call it a virtue list.  This list has two components, cardinal and theological virtues.  Another way of describing them is natural and supernatural virtues.  The graphic at the beginning of this post is meant to show how they relate to one another, beyond that of a virtue list.

Virtue ethics was heavily discussed by St. Thomas Aquinas in his Summa Theologica.  He, more than anyone else, is responsible for classifying the natural and supernatural virtues.  The natural virtues are as follows:

Aquinas argued that practicing these Natural Virtues is possible for every human being, and makes up what the world would consider a good sort of person.  But Virtue Ethics doesn’t end with the natural.  There are three Supernatural Virtues as well.  These virtues are in the Bible in 1 Corinthians 13:13.

These Supernatural Virtues are given to us through grace, primarily through the sacraments of the Church.  They elevate the other virtues by infusing them with divine energy.  Justice, for example, can be infused with Faith, Hope, and Love, and thus lead one to see others as deserving so much more than before.  Unlike the Natural Virtues, Supernatural Virtues are strengthened indirectly, usually through the Sacraments of the Church, the reading of Scripture, and through Prayer.

So in short, this diagram for Virtue Ethics shows the Supernatural Virtues of Faith, Hope, and Love at the top, as they are gifts from God.  The divine energy from these virtues flows down into Prudence, which directs the other three Natural Virtues of Justice, Courage, and Temperance.  Practicing and being aware of these virtues can have a profound effect on human lives, as we endeavor to seek God in all that we do.