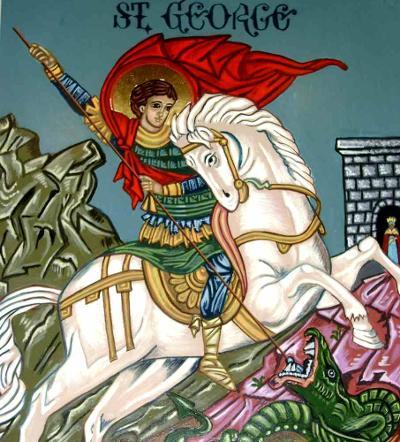 Researching Saint George is problematic. One source authoritatively states “…no details of his life are known.” Suddenly, however, acts attributed to him seem to sprout up. Apparently he was hanging around Libya when a beautiful princess was threatened by a dragon. George stepped and slew it. The dragon, not the beautiful princess. Richard I of England (the “Lion Heart”) placed his army under George’s protection and he (Richard) returned safely from the Crusades (after a brief captivity in Austria).  A later king (Edward III) founded the Order of the Garter under his patronage, and taught people to walk  around saying Honit soit qui mal y panse which approximately means “shame on him who thinks evil of it”. George is the patron saint of England, of soldiers, and of the Boy Scouts, which is pretty much a full time job.